Studio b(&b) “HET WEERHUIS” is located in Barendrecht, Rotterdam region. To be exactly; the appartment lies in a good upperclass outskirt, south of the city of Rotterdam, on the edge of Barendrecht Carnisselande, the newly constructed part of town. The city of Rotterdam lies north of the studio, nature south. In front of the studio there is free parking and direct bus and tram lines to Rotterdam city centre stop on the studio’s doorstep. Because it’s a well located, comfortable and beautifull place to stay, hereby a piece of history of the city in a nutshell.

Nowadays Barendrecht consists of two residential communities which are separated by the A29 motorway, east lies “old” Barendrecht, west lies Barendrecht-west Carnisselande. Because of the many housing activities in this former growthtown, the city became a geographical extension of the city of Rotterdam. 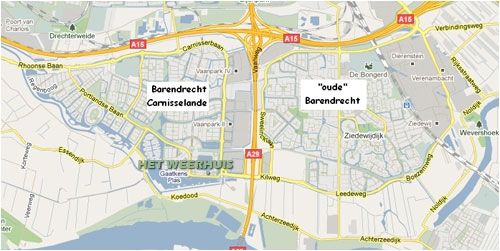 Barendrecht is an extention of Rotterdam, south of the city. Rotterdam and Barendrecht are only seperated by the A15 motorway. The newly constructed loaction Barendrecht

Carnisselande was brought to live in the Fourth Spatial Planning Extra (Vierde Nota Ruimtelijke Ordening Extra (a Spatial Planning of the DutchMinistry of Housing , 1991) has been given the popular acronym “Vinex”.  This planning participated on population growth combined with the need of good housing close to work centers. In consultation with several provinces and municipalities, newly constructed cities have arisen next to existing towns to be close to the cities but relieve traffic problems. Barendrecht Carnisselande is one of the largest newly constructed locations realized. Construction began in 1997 and till this present day, the last 7,500 new homes are built in total (and another 2,500 in the adjacent town Portland). In other words, everything in Barendrecht Carnisselande is as good as new. A quick count learns that the oldest district in the town is only 19 years old! This “new” resurrected city is, according to today’s standards, fully equipped. Public transport, sport, leisure, play and shop facilities, nature and culture, everything is within reach.

When Carnisselande emergenced, the town set up an arts plan. This plan is called ‘the elastic perspective‘ and consists 25 works of art in the public space.

– The roundabout ‘GREEN’ by Maarten de Reus is the first landmark if you enter the area by car. – The artwork on the mountain of DRFTWD, Arno v / d Mark, – Lady Carnisse on the pier by Anne Wenzel, – The ferry-bridge, “ferry” by Orgacom, – Tram-plus bridges by Jeroen Doorenweerd – The sheep “Carousel” by Guido Geelen in the park These above mentioned art works are just a selected part of the many you will find in the “new” part of Barendrecht..

If you need more information, take a look at the following websites: